Good morning everybody. I think it is a rare occasion as just it was said. The reason is – at least, this is my experience in the last several years – which politicians tend to speak more to the experts and the media, and less to the people. And I think it is a good occasion to all of us to back to the habits we have had earlier: to the direct relationship and consultation we had between the decision makers, elected persons – let’s say – leaders and the people. That is the reason I was very happy to have been invited here. I will have a rather limited presentation and will provide some room for consultation, questions and answer section.

First of all, let me please say thank you to the Aleksanteri Institute of the University of Helsinki for invite me here today. It is my honour to speak in front of such distinguished audience. I was especially grateful for this possibility because speaking to Finnish friends as a Hungarian is always a pleasure. Nevertheless we feel sympathy with Finland, since your government shows special commitment to financial disciplines in these hard times just like we do. This is also proved by the fact that both of our countries finished among the best ones in Europe regarding budget deficit – which is a great competition in Europe – in 2012 exactly at the same level: 1.9 %. Since I do not want to take advantage of your patience and I would like to leave enough time for consultation with you, I will summarize my observations concerning the major challenges Europe is currently facing in six theses.

Thesis number one. I would like to share a couple figures with you; they are going to be shocking: The total state debt of EU member states has reached the amount of 11 trillion euros. Just to be very clear it is 11 thousand billion euros. The yearly debt service of the 27 countries amounts to 2 trillion euros. The EU27 generates a debt of 1.2 billion euros every day. This means that we produce 400 billion euros of new debt each year. And if this was not enough, while European Union produces the approximately 20 percent of the World’s GDP, we spend 50 percent of the World’s total welfare spending. This list of figures clearly shows that this European financial structure is proved to be unsustainable. And if you add to this, that we are suffering of demographic challenges according to which our continent does not seem to be able to maintain itself even biologically, you can easily admit that we are facing really hard times.

Thesis number two. Despite significant efforts we as European leaders have not been able to change this structure during the last five years. The main reason of this is that political leaders should take a huge risk to fulfil the renewal of these deeply embedded post-war structures, which could easily lead to social instability. We have to acknowledge, even if it is difficult, that the concept of welfare state is over. Instead of that, we have to build up workfare states and replace entitlements with a merit-based society. In Hungary we have made a true European attempt: we have renewed the country by restructuring the major systems. We deleted the former tax system which has penalised work and was too complicated to be competitive. Our new tax system is a flat tax system, which honours those who want to work more or to employ more people. We have introduced a 16 percent tax rate on income and a 10 percent rate for companies. We have introduced Europe’s probably most flexible Labour Code; we have restructured the higher education system and the vocational system in order to meet the demands of the businesses. We have been constantly fighting bureaucracy and changed the total social system which does not keep away one from work anymore. During this attempt, which is anyway a rather difficult one, we have succeeded to meet the triple challenge faced by most of the European countries: we have been decreasing the state indebtedness, we have been improving our competitiveness, and we have been able to maintain at the same time social and political stability.

My fourth thesis says that the changing of the European values is in relation with the crisis. Nowadays Europe shares a mainstream way of thinking which says that strengthening identities increases the hazards of conflicts. This mainstream says that while one with strong identity causes troubles – I am thinking about the national and religious identity –, one with weak identity is declared to be a fair and correct partner in cooperation. One of the main conclusions we can draw from the economic crisis is that this mainstream way of thinking is a serious misunderstanding of the situation. The truth is that strong Europe can only be built on strong nations with strong moral identity. Let’s recall the famous sentences of funding father Schuman: either Europe will be Christian or there will be no Europe.

My fifth thesis highlights a complicated situation which has occurred because European Union consists of two parts: the Eurozone and the non-Eurozone countries. To overcome the crisis an enhanced cooperation between Eurozone countries is of utmost importance not only on fiscal but economic and budgetary fields as well. Non-Eurozone countries are obliged to support this, but in the meantime non-Eurozone countries should be let create and implement their own economic policy mixes. We always have to take care of our common basic values and there is no way back from our common achievements, the ‘acquis’. However, allow me to recall again: Europe can only be strong if it respects the nations it consist of. We have to be aware that Europe is under strong pressure, it has to fight emerging forces to disintegration to continue to serve its political and economic role on the continent. We have to recognize and handle those forces. The financial sector which reached already a high degree of integration has recently been showing strong signs of fragmentation. It is manifested in deleveraging of assets form the periphery to the centre, and in differences of interest rates for available credits for investments within and inside the Eurozone. Furthermore, restrictions from capital movements had to be applied to handle the situation in Cyprus. We can experience growing fears that free movement of persons could lead to pressure on the systems of social allowances in some member countries. But the most alarming development is the decreasing public support behind European integration in most member states.

Finally my last thesis would refer to the post-crisis world.

We have to understand, that after the crisis nothing will be like it used to be before. Despite our all efforts it is likely that recovery will be a long-lasting procedure. Europe which was sky-scraping before is down to earth now, in all senses. It is obvious that it was a historical mistake, that the former communist countries have not been let join the European Union immediately after the collapse of the dictatorships. All experts agree that the growth engine of the continent could be in the future Central Europe. If these countries had been able to become members of the European Union at – let’s say – the beginning of the 90’s, the Union would have gained an additional potential for growth and would have faced the challenges of the crisis in a much stronger position.

Enlargement – it seems to me – has recently been deleted from the agenda of the European Union which means that our community has – unfortunately – not learned from its old mistake. Maybe I will make now the least possible popular statement of a European politician: enlargement of the European Union towards the Balkans must be continued. We should not commit the same mistake after 23 years again.

Thank you very much. 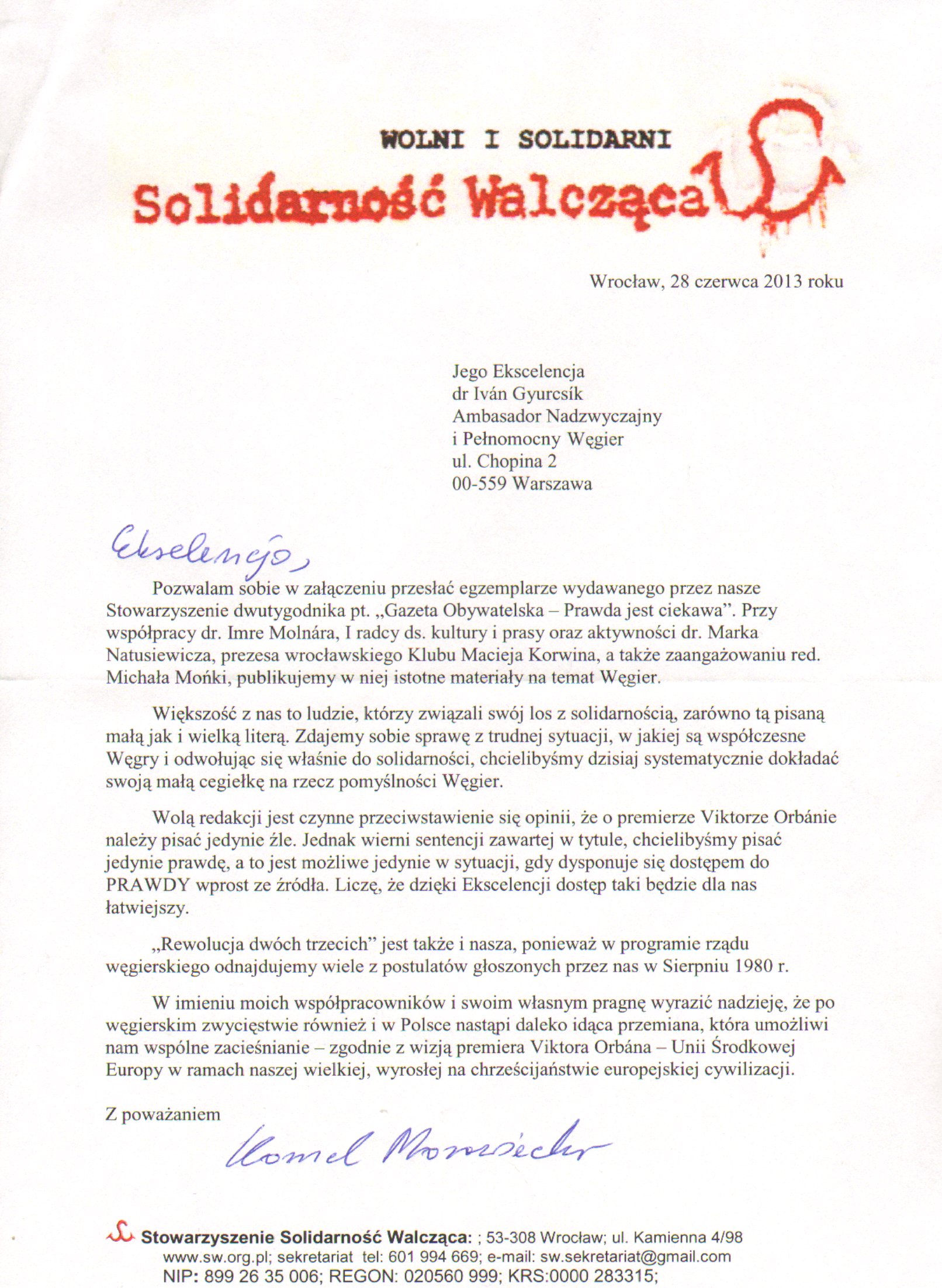 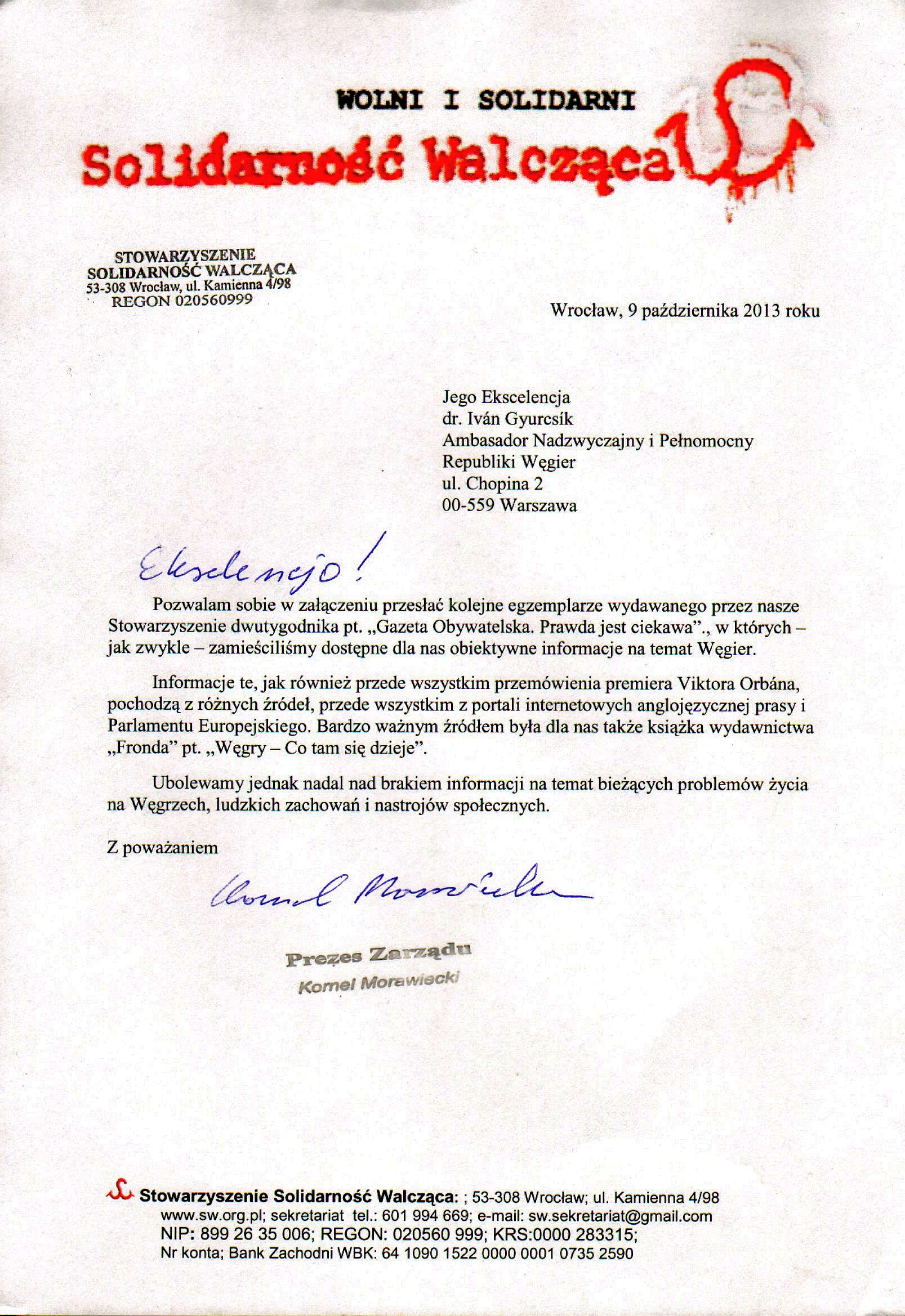